Each year, Sigma Iota Rho at GWU hosts events with leading scholars and practitioners in the field of International Affairs to enrich the knowledge of the university’s students and SIR members on a diverse array of issues.

Aside from our speaker events, our organization regularly organizes member visits to embassies in the D.C. area, cultural centers, museums, conferences, and more.

Some of our previous distinguished guests have included:

On April 15th, in collaboration with the Organization of Latin American Students at GW and the Latin American and Hemispheric Studies Program at the Elliott School of International Affairs, we hosted a conversation with distinguished guests Dr. Edwin J. Castellanos, Maria Fernanda Bozmoski, the Deputy Director of Programs at the Atlantic Council’s Adrienne Arsht Latin American Center, and Santiago Daroca Oller, Peace and Development Advisor at United Nations Guatemala’s Office of the Resident Coordinator where they discussed the effects of hurricanes and climate change on displacement, migration, and stability in Guatemala.

On February 10th, we, alongside the Institute for European, Russian, and Eurasian Studies and Elliott School of International Affairs hosted the esteemed Ambassador Kenneth Yalowitz on the state of democracy in Belarus. Previously serving as the US ambassador to the Republic of Belarus from 1994 until 1997, Ambassador Yalowitz discussed Belarus’ national and regional security, Russia’s involvement in the country, and how US relations with Belarus are likely to evolve. Participants engaged with Ambassador Yalowitz in a moderated discussion. A recording of the event can be found here. 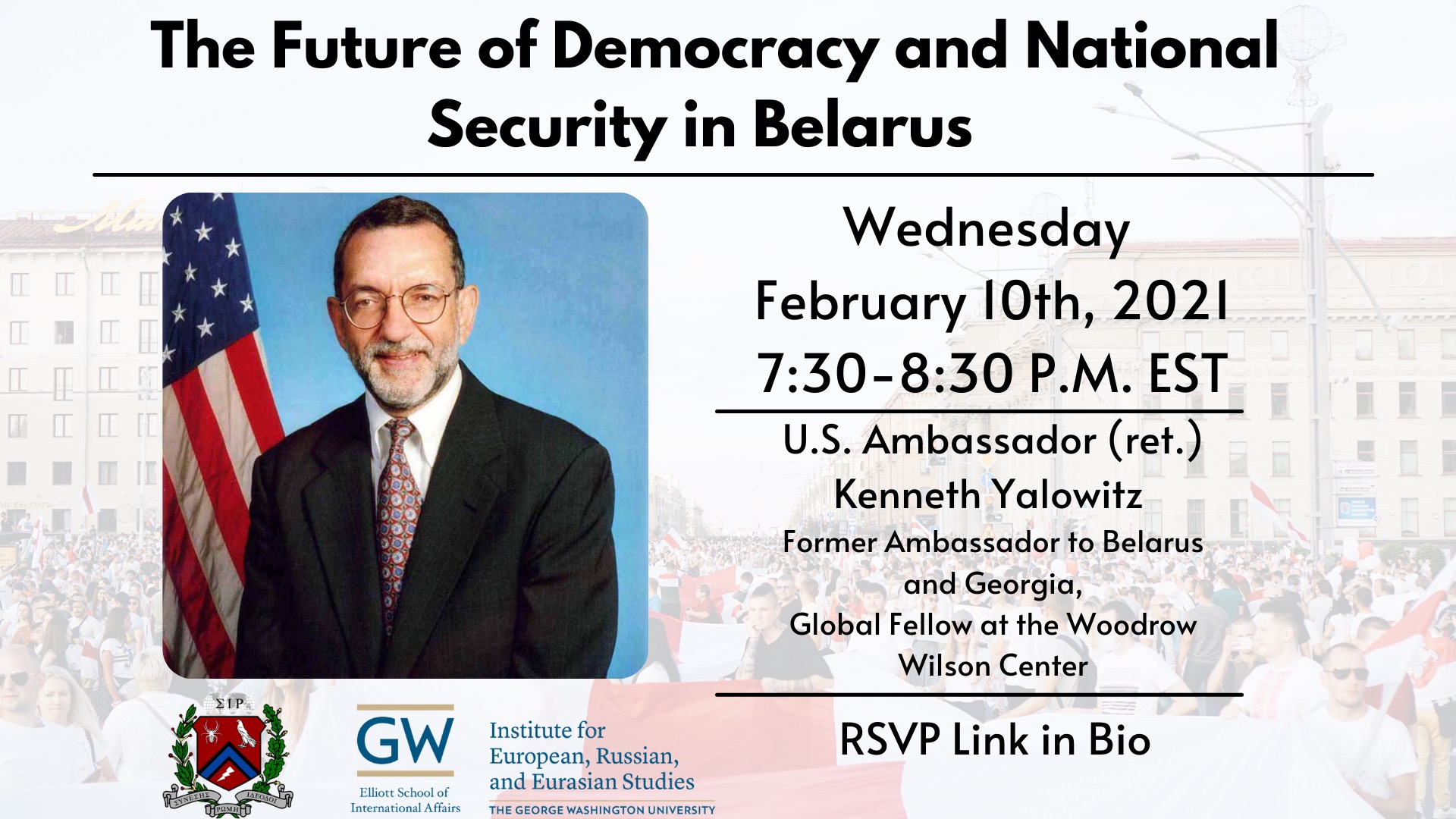 On November 19, 2020, we, alongside the Leadership, Ethics, and Practice Initiative and Elliott School Office for Diversity and Inclusion, hosted a panel discussing the multi-faceted idea of American Exceptionalism. Joining us were Temi Ibiroga, the Program and Research Associate for the Africa Program at the Center for International Policy, Charles Kupchan, Professor of International Affairs at the School of Foreign Service and Government Department at Georgetown University and Senior Fellow at the Council on Foreign Relations, Eric Cheyfitz, the Ernest I. White Professor of American Studies and Humane Letters at Cornell University, and Nefta Freeman, a long time Pan-Africanist, human-rights organizer, and an Events Coordinator at the Institute for Policy Studies. A recording of the event can be found here. 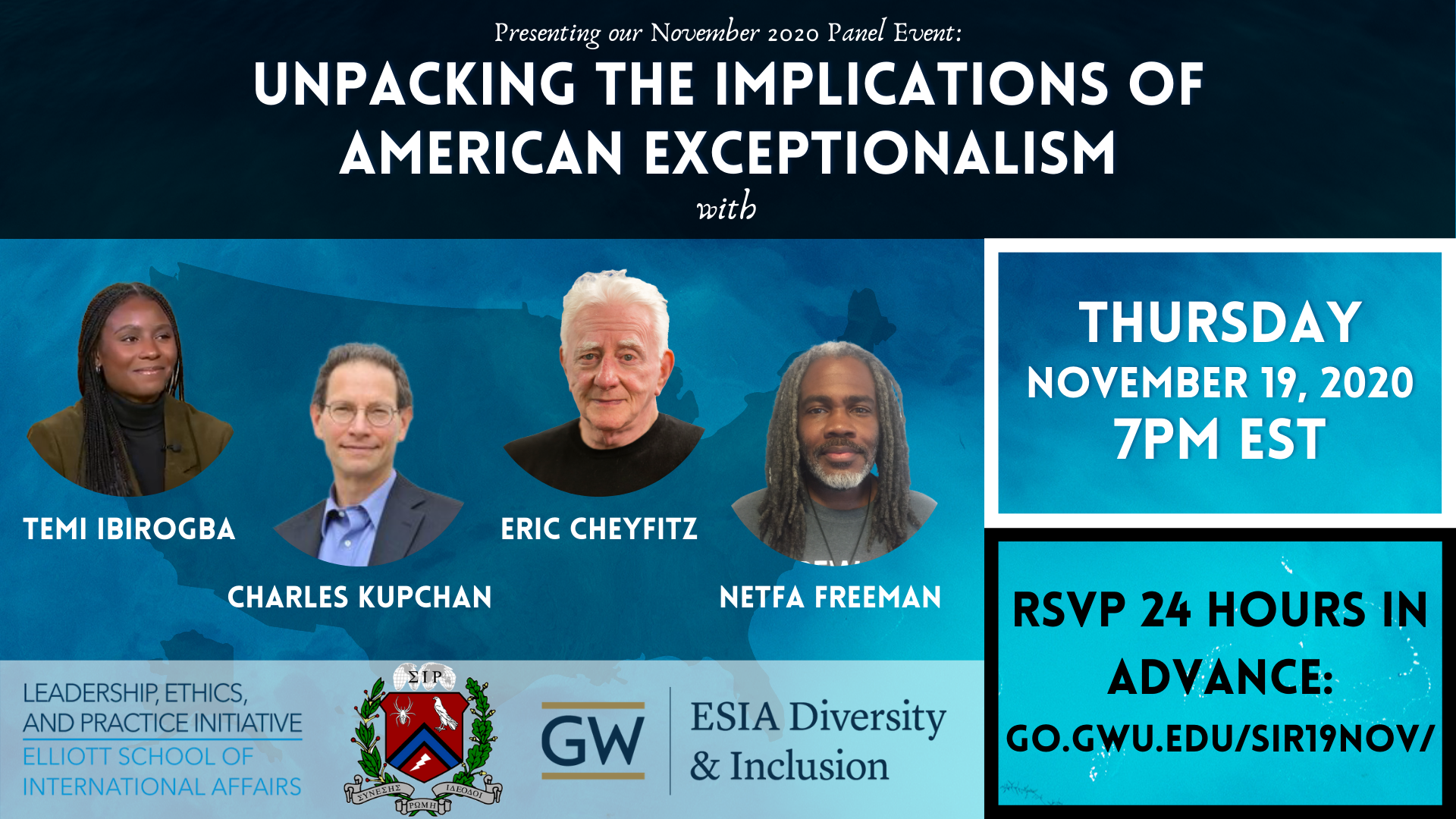 On October 13th, 2020, we, alongside the Sigur Center for Asian Studies, the Institute for Public Diplomacy & Global Communication, and the Organization of Asian Studies, hosted Mr, Andreas Harsono, a senior researcher at Human Rights Watch Indonesia. Topics of discussion included human rights abuses, media censorship,  and ethnic and religious violence in Indonesia. A recording of the event can be found here. 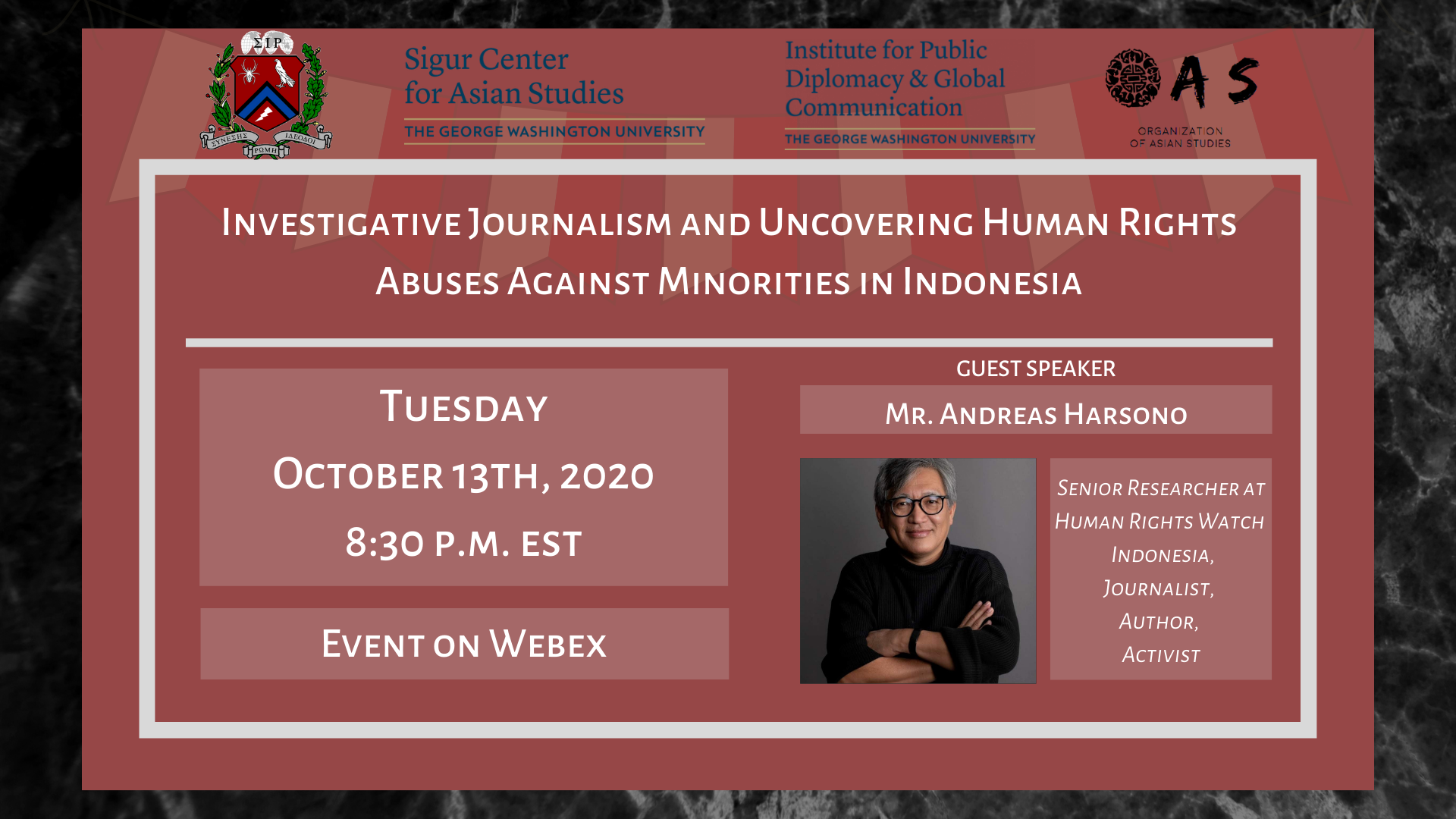 On September 23rd, 2020, we, the Institute for African Studies, and the Young Black Professionals in International Affairs hosted Dr. Imani Cheers, Dr. Nemata Blyden, and Dr. Msia Clar. The topics of discussion included African peoples, politics, and deconstructing flawed ideas of Africa within history, media, and politics. A recording of the event can be found here. 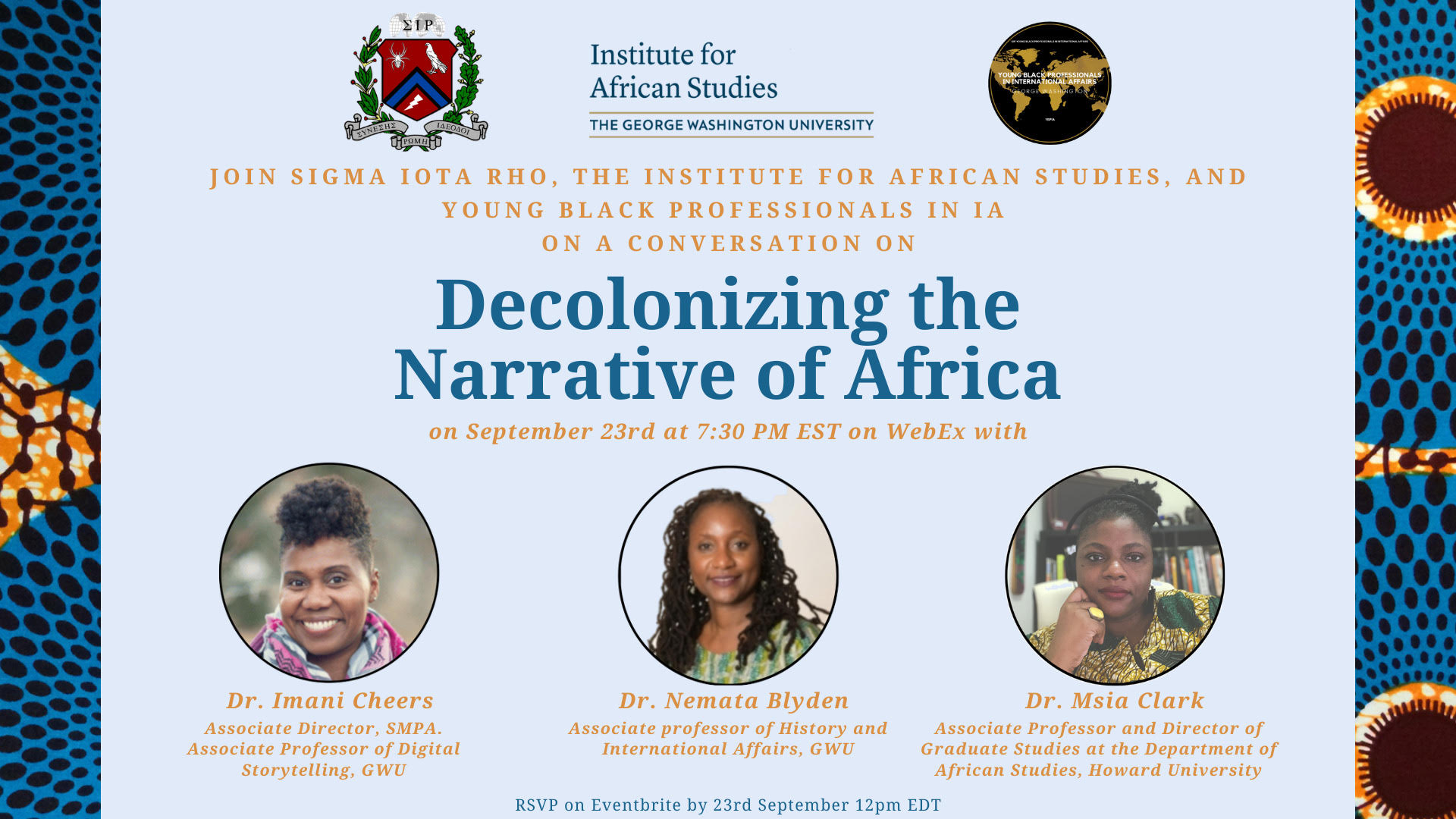 On February 27, 2020, we hosted Francisco Bencosme, the Asia Pacific Advocacy Manager at Amnesty International USA, and Rohit Tripathi, electrical engineer and President of Young India, a grassroots policy advocacy group, to raise awareness about recent events in India as a result of the Citizenship Amendment Act (CAA) and National Register of Citizens (NRC). 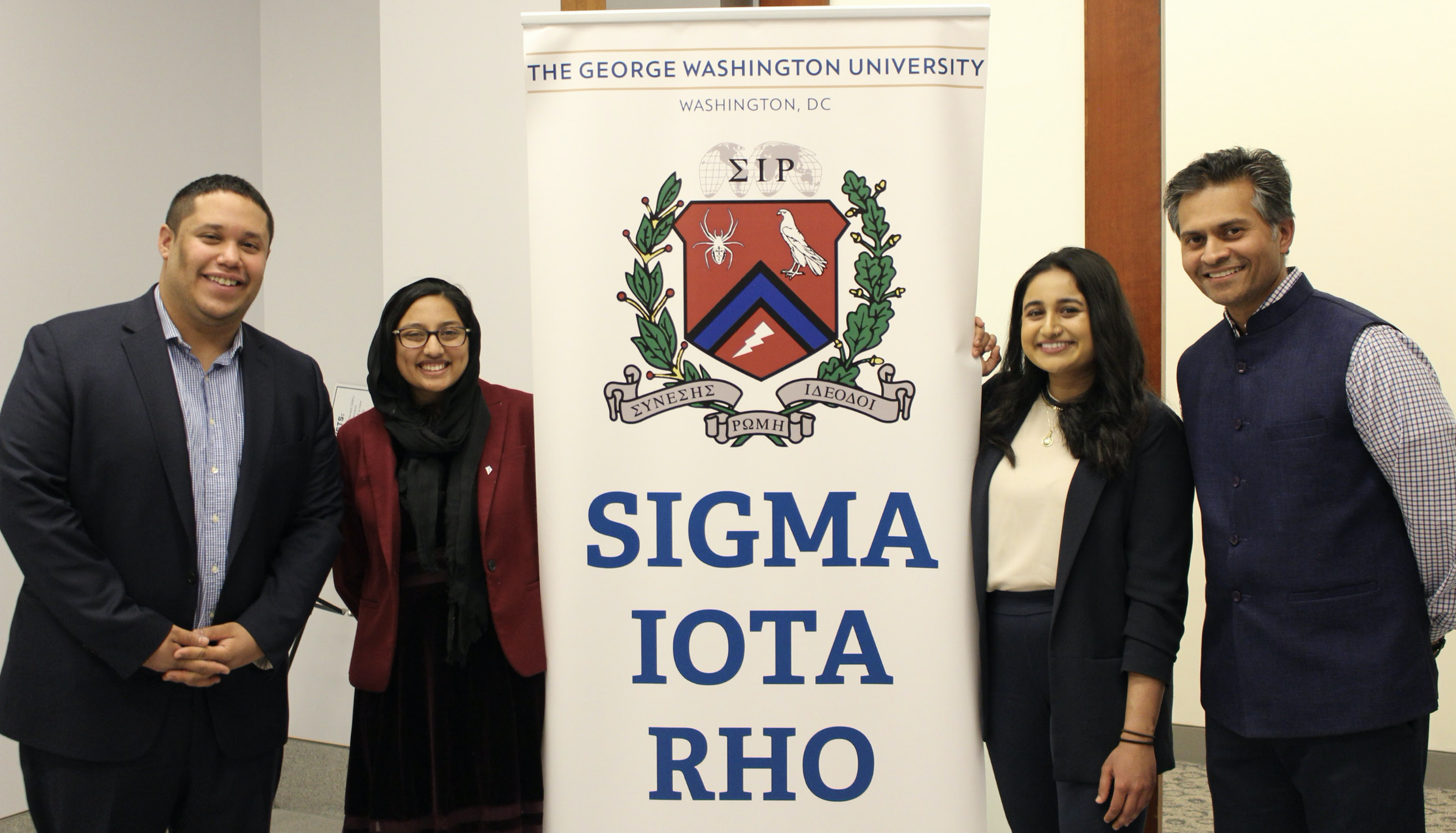 On November 21, 2019, we hosted a panel discussing discuss gender dynamics in conflict. Joining us were Kathleen Luenhast, Director of Gender Policy and Strategy at the United States Institute of Peace (USIP) Shirley Graham, Director of the Gender Equality Initiative in International Affairs (GEIA) and Associate Professor of Practice in International Affairs, and Ambassador Bonnie Jenkins, Founder of Women of Color Advancing Peace and Security (WCAPS) and Senior Fellow at the Brookings Institution.

On October 30, 2019, we hosted Donatienne Ruy, an associate fellow with the Center for Strategic and International Studies (CSIS) Europe Program, and Susan Corke, Senior Fellow and Director of the bipartisan Transatlantic Democracy Working Group (TDWG) with The German Marshall Fund of the United States (GMF), to discuss the future of Brexit and other pressing issues in Europe. 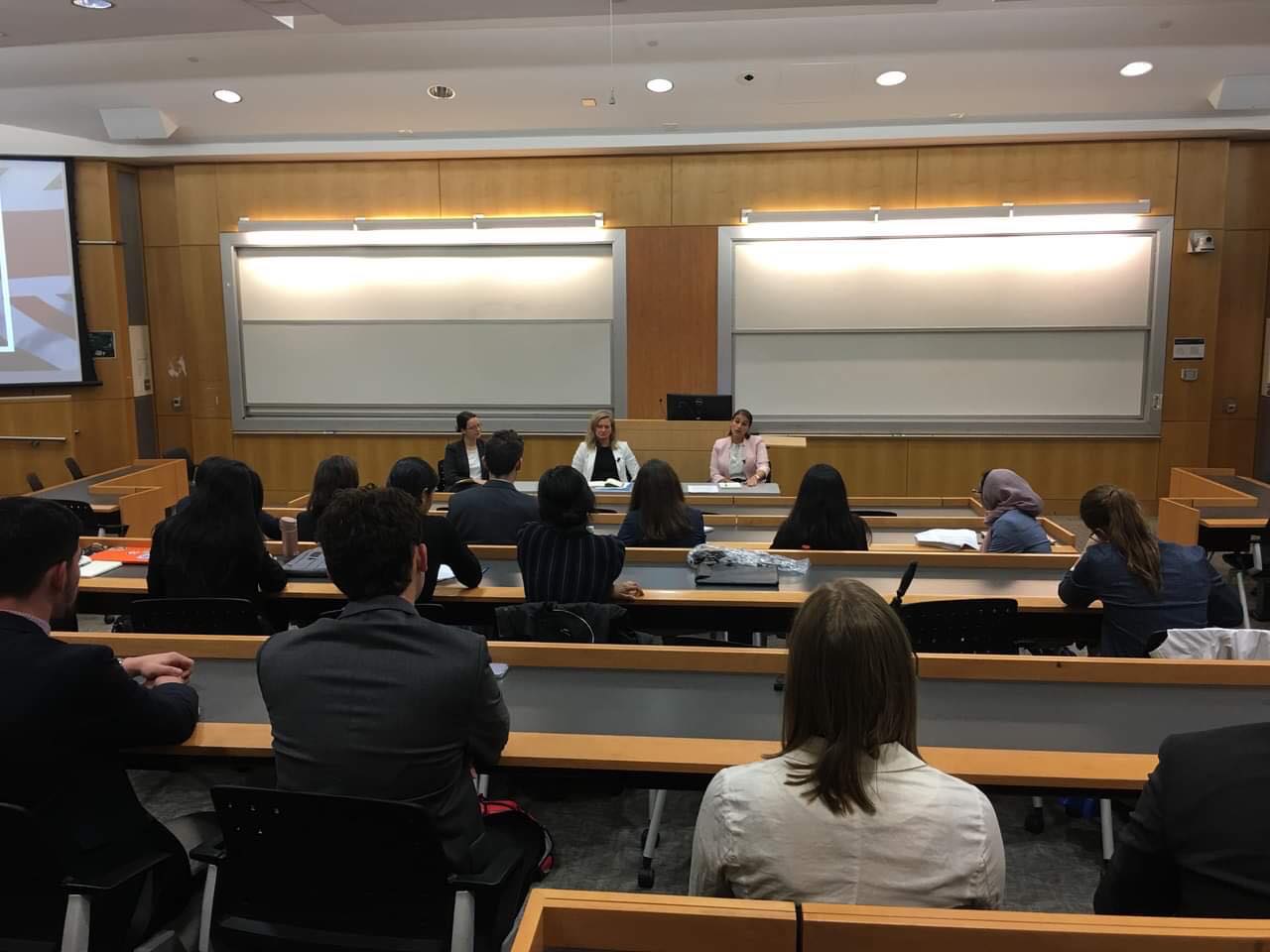 On September 12th, 2019, we hosted Andrew Plitt, a career member of the Senior Foreign Service who currently serves as USAID’s Deputy Assistant Administrator for the Middle East region, discussing sustainable development in the Middle East. 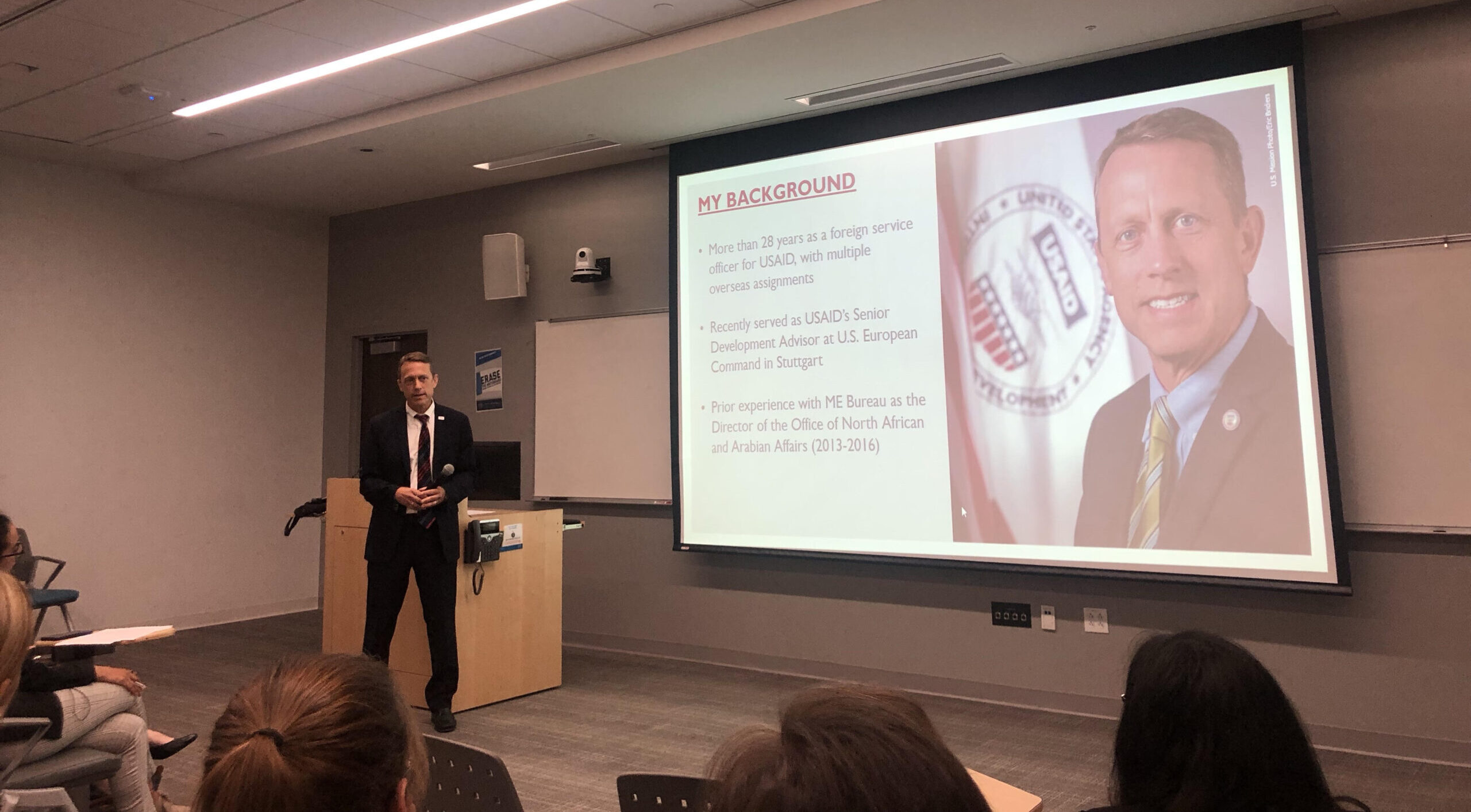 On April 23, 2019, we hosted a panel discussion regarding the future of West Africa. Joining us were Ambassador Liberata Mulamula, a Visiting Scholar to the Elliott School and Acting Director of the Institute for African Studies, Judd Devermont, Director of the Africa Program at the Center for Strategic and International Studies, Professor Jennifer Joel Obado, Visiting Scholar to the Elliott School, and Robert P. Jackson, former U.S. Ambassador to Ghana 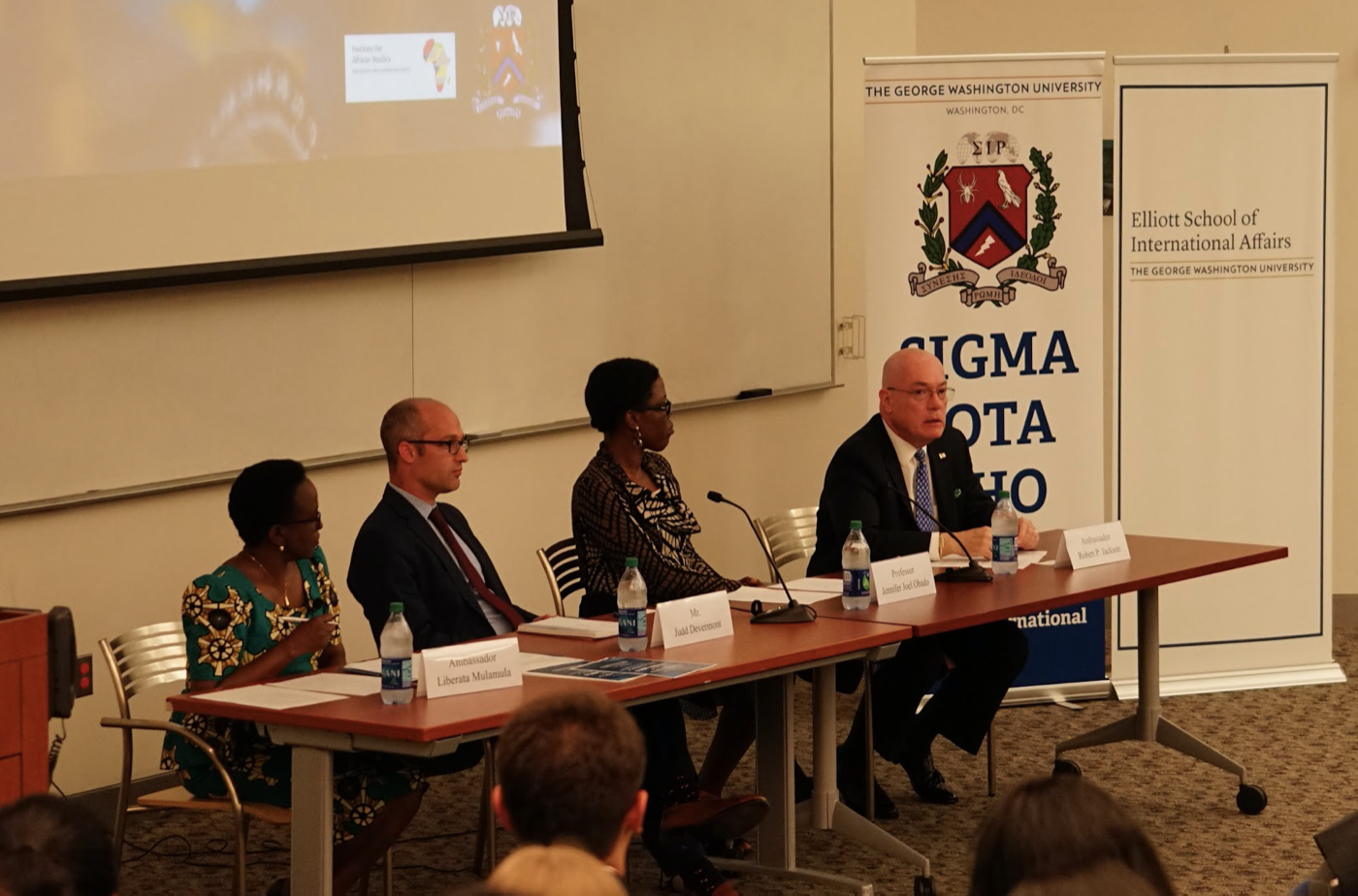 On March 21, 2019, we hosted a round-table style discussion about post-conflict communities and reconstruction with our friends at No Lost Generation (NLG) GW. Joining us were Former Assistant Secretary of State Frederick Barton, Conflict Resolution Professor Claudine Kuradusenge-McLeod, International Center for Religion and Diplomacy (ICRD) Director of Programs Martine Miller, and Professor Michael Barnett, who moderated the discussion. 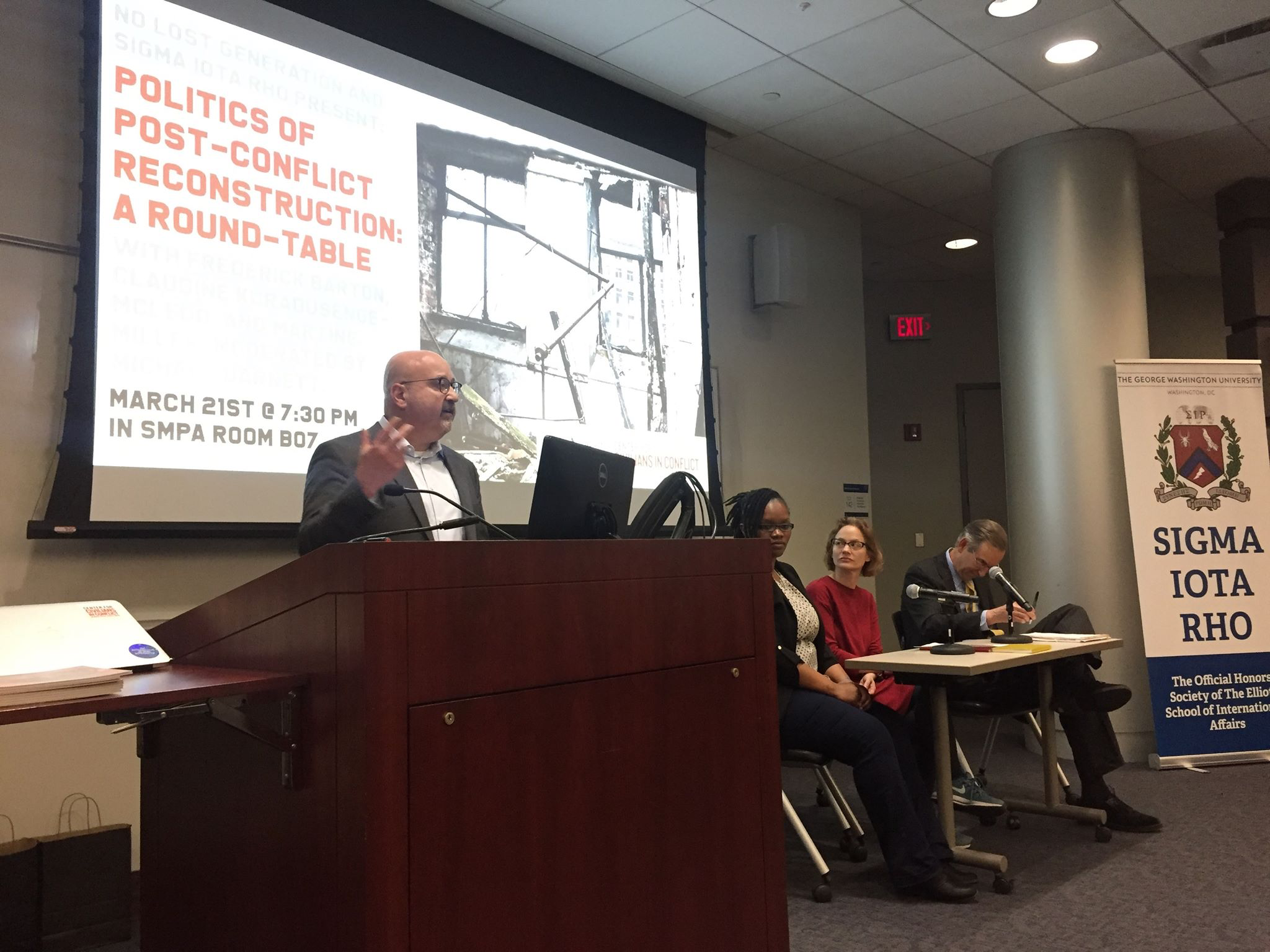 On March 5, 2019, we discussed US-Pakistan relations and current events in conjunction with the Organization for Asian Studies and the Sigur Center for Asian Studies. Joining us was Dr. Madiha Afzal, Visiting Fellow for Foreign Policy, Global Economy and Development at Brookings, whose latest book, Pakistan Under Seige: Extremism, Society and the State, was discussed as well. 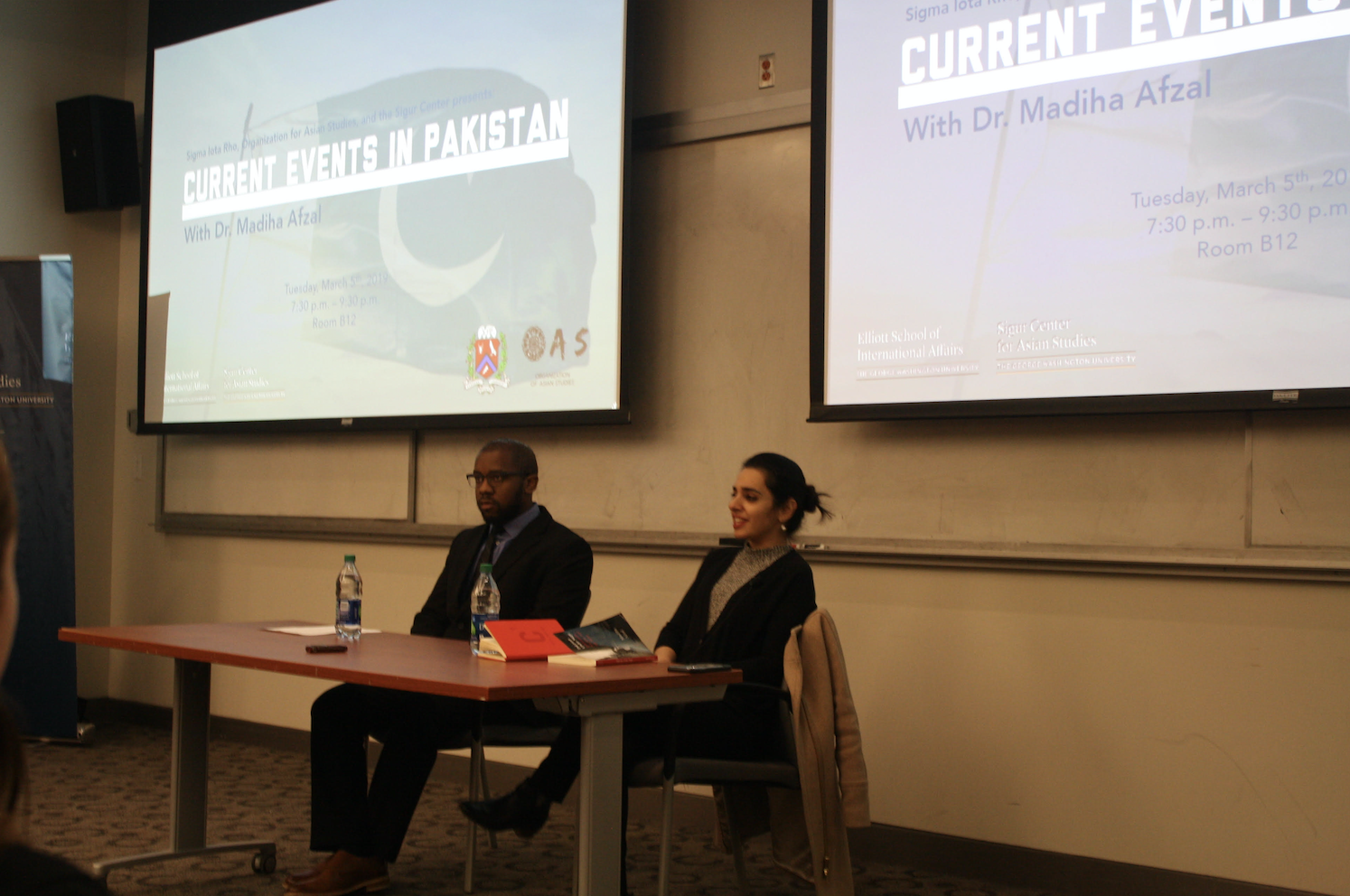 On January 29, 2019, we hosted Dr. Guadalupe Correa-Cabrera, Global Fellow at the Wilson Center’s Latin American Program and President of the Association for Borderland Studies (ABS). Ther discussion centered around the US-Mexico relationship, including topics such as trade, security, migration, as well as current events in Mexico. 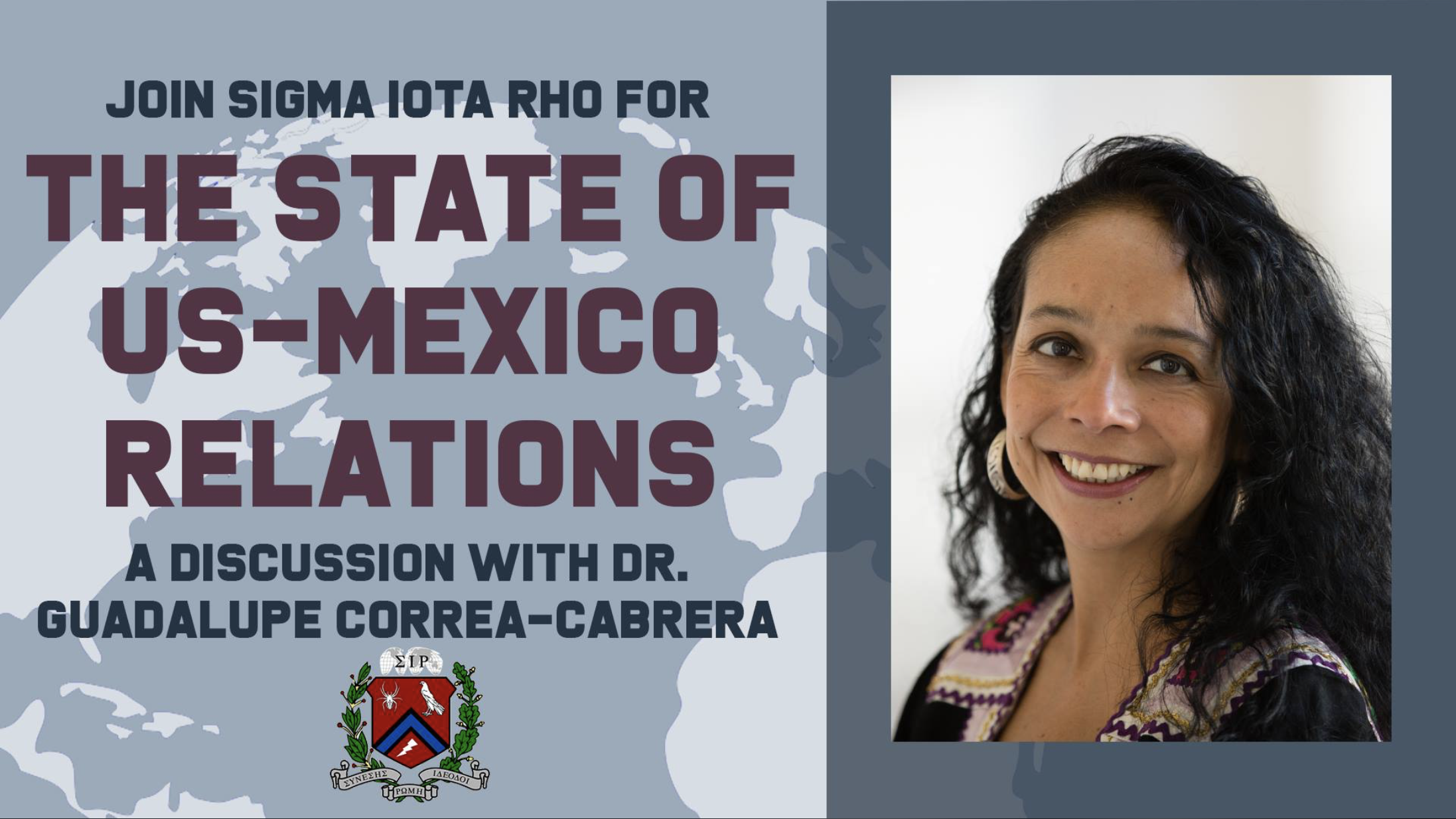 On November 29, 2018, we hosted Steve Hollingworth, President and CEO of the Grameen Foundation, who has spent thirty years in the field of international development, serving as the Chief Operations Officer of CARE and as the President of Freedom from Hunger. In conjunction with the Institute for International Economic Policy, we discussed the Grameen Foundation, development efforts around the world, and the intersection of microfinance and technological innovation. 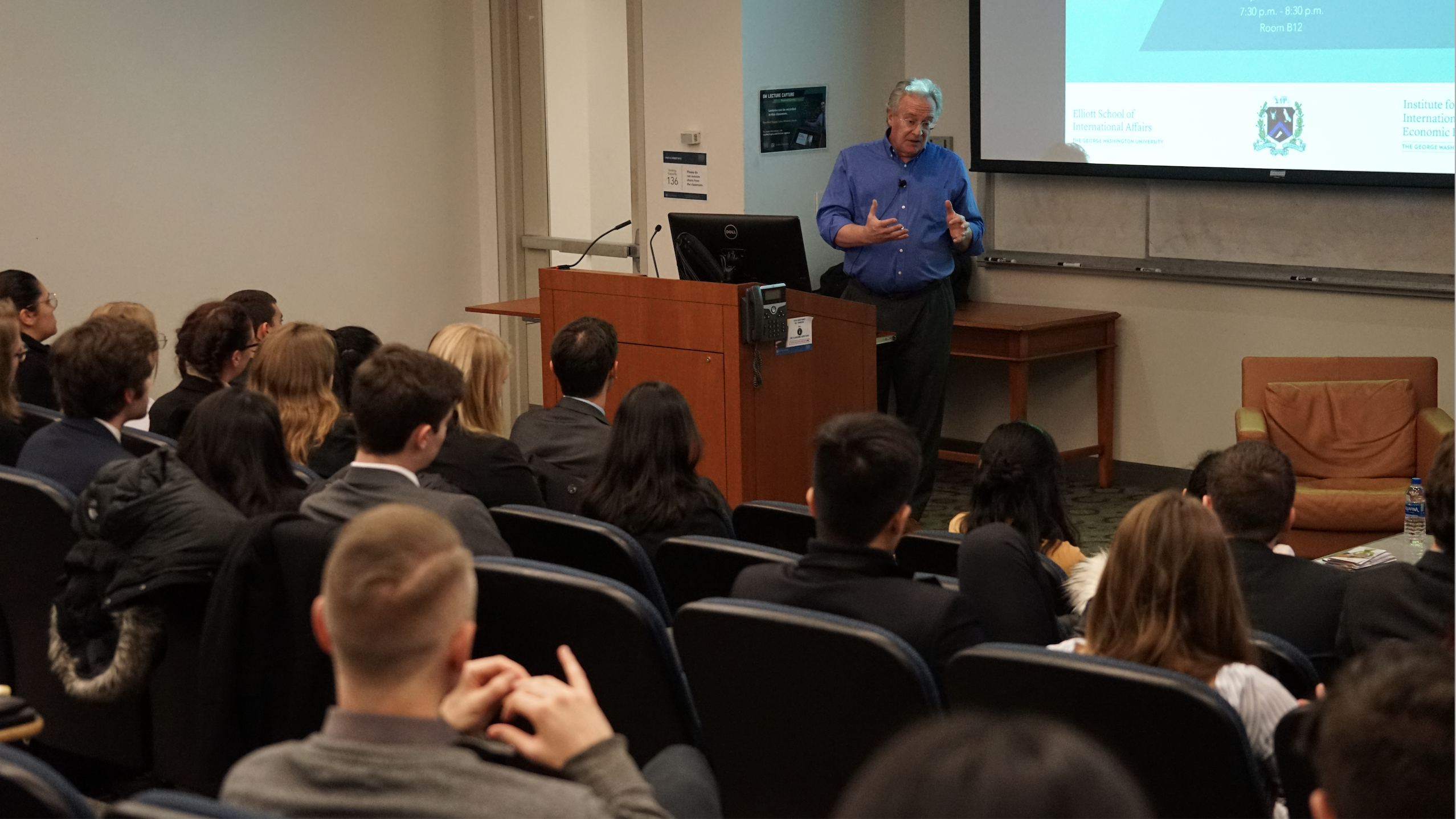 On November 14, 2018, we, in conjunction with  GW Blockchain Club, and GWU Women in Computer Science, discussed the state of cybersecurity with Shapiro Visiting Professor Michelle Howard, sharing her experiences and insights on what the future holds as the realm of cybersecurity evolves. In her 35 years in the Navy, Professor Howard has faced a wide and diverse range of challenges, including peacekeeping, disaster relief, and anti-piracy operations; after retiring from the Navy, she has turned her focus to the cyber domain. 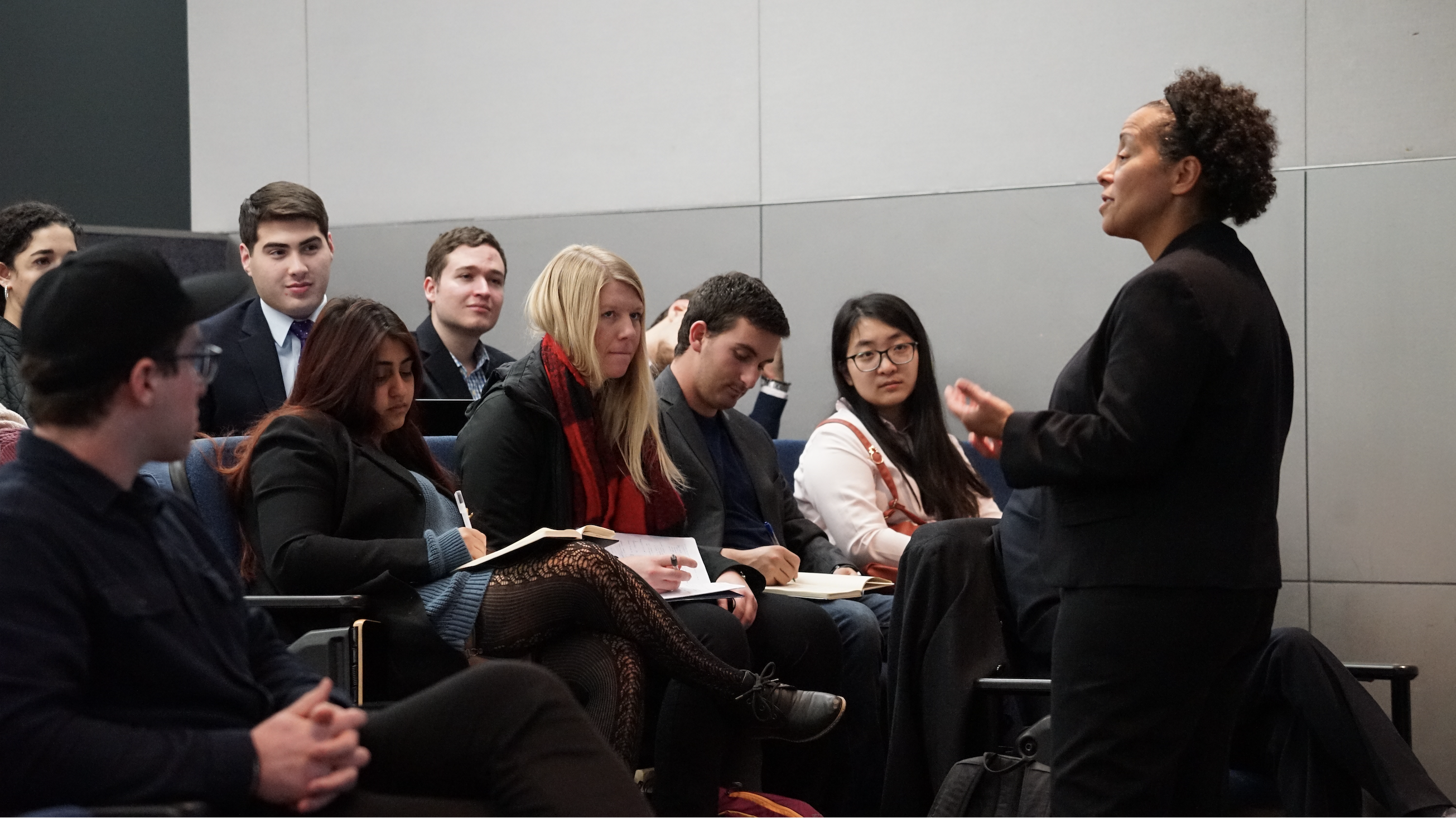 On October 25, 2018, we hosted a discussion between Sahr Muhammedally, the Director for MENA at the Center for Civilians in Conflict (CIVIC), and Conflict Resolution Professor Claudine Kuradusenge-McLeod, on CIVIC’s capacity building project with Yemeni forces, how talks are conducted between conflict parties under CIVIC, and what we, as students and members of academia, can do to play our part in helping these civilians. CIVIC is an international non-governmental organization dedicated to the protection of civilians in conflict, working directly with governments, policymakers, armed actors, and communities to find solutions together that prevent, mitigate and respond to civilian harm. 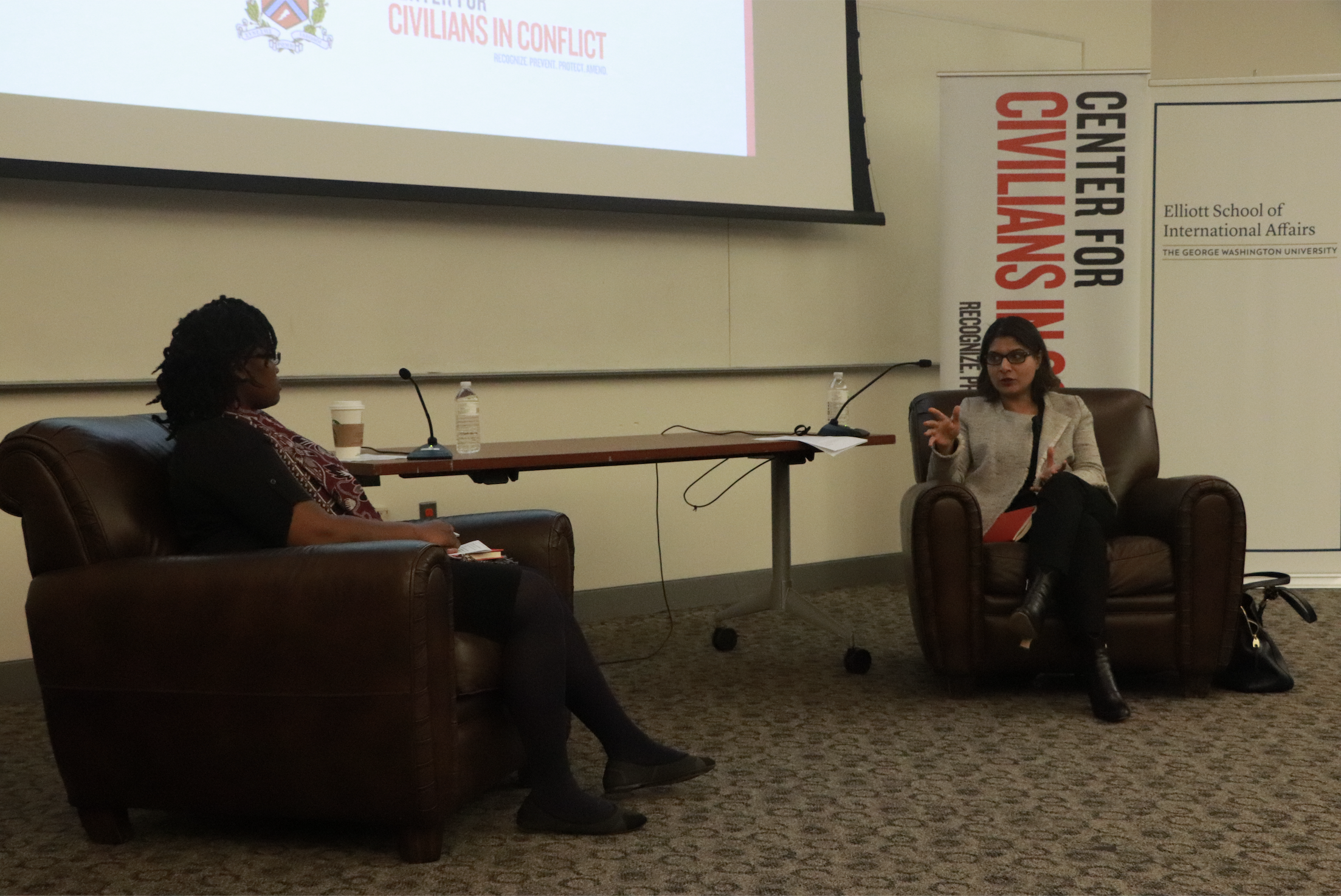 On September 13, 2018, we hosted a panel discussion regarding the growing influence of China on the world stage. This event featured Mr. Matthew Goodman, Senior Vice President and William E. Simon Chair in Political Economy and Senior Advisor for Asian Economics at the Center for Strategic and International Studies (CSIS), Dr. Michael Green, Senior Vice President and Asian and Japan Chair at CSIS and the Director of Asian Studies at Georgetown’s Edmund A. Walsh School of Foreign Service, and Dr. Nong Hong, Executive Director and Senior Fellow at the Institute for China-America Studies (ICAS).

We are working to provide a full list of upcoming events for the 2020-2021 school year. Please check back soon, or email sir@gwu.edu for more information.